If you own a Shopify eCommerce website and you’d like your brand name or Shopify store name in your footer instead of Powered By Shopify, you can do this quickly and easily without having to edit the code of your active theme.

And this applies to all Shopify themes, from the Brooklyn theme to the debut theme.

“Powered by Shopify” is a brief line of text and a link in the bottom left-hand corner of every Shopify store’s footer. There are approximately 43,600,000 of these pages listed in Google’s search results at the time of publication (Janurary 2022), though there may be many more in all honesty. This indicates that this message can be found on anywhere from 100,000 to several million websites.

Although the little badge is harmless, there are a few reasons why you might wish to get rid of it.

Why get rid of the powered by Shopify link?

There are three good reasons to get rid of the Powered By Shopify text and link, all of which will be overlooked by the vast majority of all Shopify store owners.

1. The badge contains a link to Shopify’s main page. This potentially means a small amount of SEO value will be going to Shopify (PageRank and maybe other signals), decreasing the worth of each of your pages.

Even if the value reduction is minor, it could mean the difference between ranking in the visibility range for a competitive query and receiving no traffic.

2. Making this emblem accessible may increase the number of hacking attempts, phishing attacks, and targeted spam. All of them might be the result of someone using a program like grep to trawl the web for Shopify websites, then seeking ways to hack, defraud, or spam you once they find them.

While they can find out you’re on Shopify through other means, removing the badge makes your site less likely to land upon a criminal actor’s list of sites to attack or exploit.

3. The majority of store owners demand complete control over their site’s design, including the rarely visible footer. The removal of the Powered by Shopify badge might be viewed as a means to improve the site’s appearance and feel while maintaining the brand’s image.

Here’s how to remove the Powered by Shopify text badge from your website for any reason. We’re going to go over this with Exile Gear, an eCommerce SEO client of mine.

Now, on to the steps to remove powered by Shopify and get rid of the link directly from your Shopify dashboard without having to touch the code editor, theme code, theme files, or footerliquid file.

You will get to it by scrolling down to “Online Store” on the left-hand navigation menu and then selecting “Themes” directly under it.

This is how your page will look.

Step 2. Pick “Actions” from the dropdown next to the current live theme, then scroll down and select “Edit Languages.” 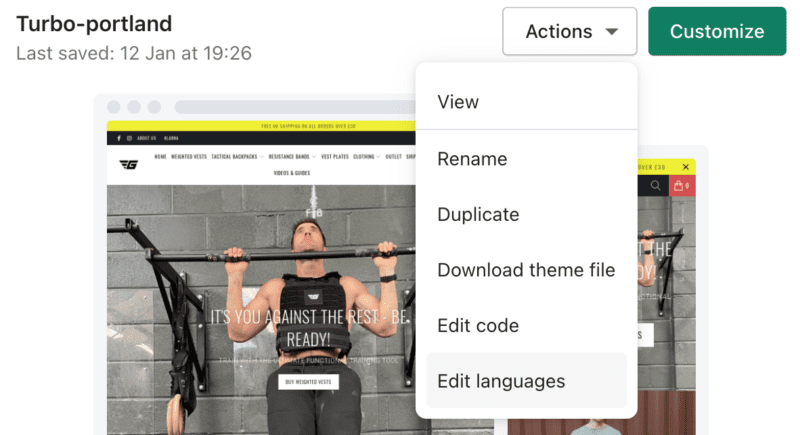 This will direct you to the language editor, which is odd because we aren’t editing a language. However, as you’ll see in a moment, this is where Shopify has placed the controls for the ‘Powered by’ badge.

Step 3: At the top of the page, type “Powered” into the filter box.

This is how it should look.

Step 4: Wait for it to filter. A progress bar may be visible at the top of your screen.

Step 5. Move your mouse cursor over the text box and press the space bar to insert a single space, removing the sentence “Powered by Shopify.”

The top right-hand corner of your screen has a green save button. If the “Powered by Shopify” logo still appears in your site’s footer after this, double-check that your modifications were saved.

When your update is complete, a small bubble message with the words “Translations updated” should appear at the bottom of the message.

Note 1: If you need to add this back in later, simply delete the space you created in the box, and the “Powered by Shopify” text will reappear.

Note 2: If you switch themes or restore an older version of your current theme, you’ll most likely have to go through the procedures again to remove the link again. When you’re finished working with a new live theme or making adjustments to your theme, always double-check what you’ve done.

Instead of Powered by Shopify, what should you put in the footer?

Adding a trust badge from well-known business associations that you belong to, or money-back guarantees, social network links, and contact information in the footer, rather than “Powered by Shopify,” is likely to generate significantly higher levels of trust.

Take a look at how this is done in Gym Shark, one of the best-known British brands in the world.

To increase the level of confidence and belonging they added “be a visionary” instead of “Powered by Shopify“, which in my mind makes perfect sense and is quick and easy to do.